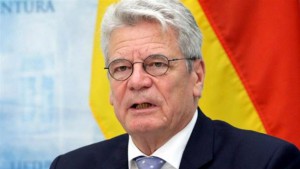 Swiss officials are investigating an alleged plot by a man affiliated with the ISIL to kill German President Joachim Gauck, a report says.

The suspect, 27-year-old Osama M., has been accused of preparing to carry out terrorist attacks using explosives and poisonous gases, with his main target supposed to be Gauck, the Berliner Morgenpost daily reported on Saturday.

It is said that Osama had been planning to mount separate raids on Bellevue Palace, the official residence of Gauck in the German capital Berlin, a military hospital, and a building belonging to pharmaceutical giant Bayer.

He is also suspected of trying to create a terror cell in Switzerland.

Osama, detained in March 2014 in Beringen, northern Switzerland, called himself a “well-known and respected fighter” from the ISIL terror group. He is thought to have had contacts in Syria, Austria, Germany, and the UK.

The suspect is currently being held in the Swiss city of Bern on suspicion of terrorism, and his detention was recently extended by the Swiss Federal Criminal Court.

The ISIL terrorists, of whom many are foreign militants, currently control parts of Syria and Iraq. They have carried out heinous crimes in the two countries, including mass executions and the beheading of people.

The US National Counterterrorism Center (NCTC) said in February that more than 20,000 individuals from around the world, including many Westerners, have traveled to Syria to join the ISIL and other extremist groups.

Foreign militants from over 90 countries, including at least 3,400 people from Western states and more than 150 Americans, have gone to Syria to join the terrorist groups there, the NCTC added.

Security officials in Western states fear that those have joined the terrorist groups in the Middle East will use their combat skills against their homelands upon returning.