You are here: Home / Europe / Swiss arrest 2 Tunisians over links to Islamic terrorism 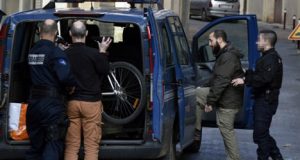 Police in southern Switzerland have detained two Tunisian asylum-seekers on suspected links to foreign extremism, like reported by washingtonpost.com.

The Swiss Federal Police say in a statement Tuesday that they ordered the arrests two days earlier in the southern town of Chiasso, near the Italian border.

The statement said the two were detained because they posed a potential risk to Swiss domestic security “in connection with terrorist activities abroad.” It did not elaborate.

Word of the arrests comes a day after Italian authorities said Anis Hanachi, a 25-year-old Tunisian terror suspect who was arrested in northern Italy, had fought in Syria.

The Italian authorities said Hanachi was believed to have radicalized his older brother Ahmed, who on Oct. 1 stabbed two women to death in the French city of Marseille.