You are here: Home / Europe / Swedish prosecutors: No reason not to deport Palestinian terrorist 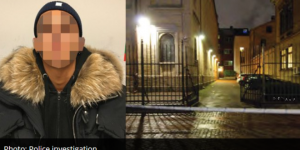 Swedish prosecutors appealed to their country’s Supreme Court against a lower tribunal’s decision not to deport a Gazan immigrant who firebombed a synagogue, like reported by inn.com.

The unusual appeal announced Thursday by the Public Prosecutor’s Office is of a June court decision not to deport Gaza-born Feras Alnadim, who attacked a synagogue in Gothernburg in December with two accomplices. The appeal follows vocal protests about his trial by Israel and the World Jewish Congress.

Last month, a Swedish appeals court overturned a criminal tribunal’s ruling from June stating that Alnadim would be deported at the end of his two-year prison term. The firebombing, he and his accomplices said, was payback for US President Donald Trump’s decision to have the United States recognize Jerusalem as Israel’s capital.

Since Alnadim committed a crime that “could be perceived as a threat to other Jews,” and that Israel “might be interested in the matter,” the appeals court ruled that one “cannot safeguard the man’s fundamental human rights if he is deported to Palestine,” the judge wrote in his opinion.

The Public Prosecutor’s Office decided to appeal the ruling in the Supreme Court because “there is no reason to assume that the man would be subjected to death penalty, torture or other inhuman treatment upon return to Palestine,” the office wrote in a statement Thursday.

Aron Verstandig, president of the Council of Swedish Jewish Communities, in a statement on Facebook called the prosecutors’ call to appeal an “important decision.” He said the community expects the Supreme Court to order Alnadim’s deportation.