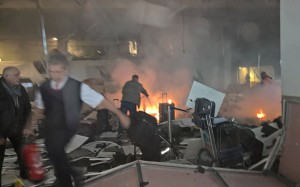 Supporters of Islamic State praised on social media blasts in Brussels that killed about 20 people on Tuesday.

“The state will force you to reevaluate your ways a thousand times before you are emboldened to kill Muslims again, and know that Muslims now have a state to defend them,” said one supporter of the group on Twitter.