You are here: Home / MidEastGulf / Sunni tribes in Kirkuk say they will fight ISIS alongside Peshmerga 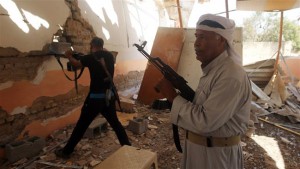 Sunni tribal leaders and prominent figures from southern Kirkuk Province said that their tribesmen should take part in any battles being launched  against the Islamic State (ISIS) to retake territory in the Kirkuk region.

In a meeting with the Kurdish leader Masoud Barzani on Sunday, the Sunni tribal leaders said that they are ready to fight alongside the Peshmerga to expel the extremist group from their territories, including Hawija, Daquq, and Rashad, according to an announcement released by Barzani’s office.

“The tribal chiefs of Kirkuk areas also emphasized that they trust the Peshmerga forces and security agencies; they are with any step being taken to protect the security of Kirkuk and its outskirts,” the statement read. “They all appreciate the Kurdistan Region in opening its doors to a huge number of refugees, despite its economic crisis.”

For his part, Barzani supports the participation of Sunni tribes in reclaiming their territories from ISIS, saying, “It is the best way, and you should participate in liberating your areas and for that purpose we will coordinate with other associated parties.”

Barzani reiterated his stance that the future of Kirkuk in a post-ISIS era depends on the local population. “As I earlier made clear,” he said, “the fate of Kirkuk is in the hands of its people and in the future they will freely decide and we all must respect their decision.”

He has also stressed that there will be no place for violent parties in these areas and all necessary measures have to be taken to secure the region.

“The extremists will have no future in the area,” Barzani stated.

Hawija, Riaz, and Rashad are three districts southwest of Kirkuk considered to be ISIS strongholds.