You are here: Home / Africa / Sultan of Sokoto says Boko Haram is un-Islamic 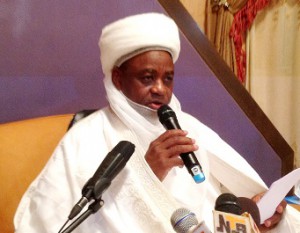 The Sultan of Sokoto, Alhaji Sa’ad Abubakar III, in his Sallah message to Muslims in the country, has affirmed that all acts of insurgency were un-Islamic, alleging that insurgency was against the tenets of Islam and against the cultures and norms of Muslims in Nigeria and the world over.

DAILY POST reports that the sultan disclosed this on Thursday in Sokoto. He said in the North East Zone of the country, there had been tremendous achievements in the ongoing fight against insurgency.
Abubakar said, ” We must commend the various security agencies in the country for their sustained efforts in taming the menace of insurgency and other related crimes in the nation.

” These commendable efforts must be sustained to avoid complacency and to sustain the giant strides in this direction.”

The Sultan commended security agencies in the state for working round the clock to ensure the prevalence of sustainable peace and security, and further commended the Federal and Sokoto State Governments for providing security agencies with the enabling environment to diligently operate.

“The prevailing peace and security in the state and Nigeria in general is due to good governance,” he noted.

“Let me use this medium to commiserate with the families of the victims of insurgency as well as those of the recent Makkah crane crash which resulted in about 110 deaths, including six Nigerians. I also want to commend the Saudi authorities for promptly treating the injured pilgrims as well as compensating the dead, saying these acts constitute a mark of leadership.

“At all levels, the government are trying their best to provide for the needs of the people, but more should be done, with more policies and programmes being introduced to further reduce the menace of high rates of poverty and unemployment in the country. Leadership is a trust from God and we must strive to discharge it diligently, piously and transparently,” the Sultan stated.

“In this regard,” Abubakar continued, “I commend Gov. Aminu Tambuwal for sustaining the laudable programmes and policies of his predecessor such as the retention of the Zakkat and Endowment Committee.”

The Sultan, however, conclusively appealed to wealthy individuals in the country to positively complement the efforts of the three tiers of government in tackling poverty through job creations for youth.