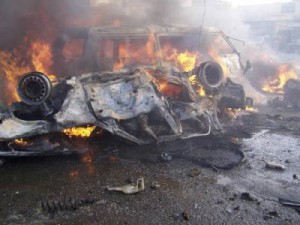 A suicide bomber in a car blew himself up at a checkpoint near Libya’s Misrata city Thursday, killing two guards, state news agency LANA quoted a military source as saying.

The attack was against forces from the port city whose troops are allied with a self-declared government based in Tripoli.

The Misrata forces are fighting ISIS militants who have profited from Libya’s turmoil to gain ground in the city of Sirte.

Four years after the fall of Moammar Gadhafi, Libya is in chaos, with two rival governments and their armed forces battling for control.