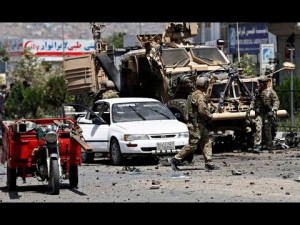 A suicide car bomber has reportedly hit a convoy of foreign troops Tuesday in Kabul with casualties feared.

The blast took place in Shah Shahid area of Kabul when a vehicle belonging to foreign forces was passing by the area.

Ministry of Interior Affairs (MoI) spokesman Sediq Sediqqi confirmed the blast. However, he didn’t provide a detail on possible casualties.

No group including the Taliban has so far claimed responsibility for the attack.