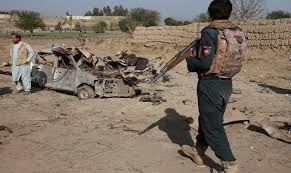 A suicide car bomber targeted the convoy of a provincial governor in eastern Afghanistan on Monday, killing at least 8 people, including four civilians, government officials said, according to dailymail.co.u.

The condition of the governor, Rahmatullah Yarmal, was not immediately known and officials would not confirm local reports that he was slightly wounded in the bombing in Laghman province. The governor’s spokesman, Asadullah Dawlatzai, said only that along with the eight fatalities, about 30 people – both military and civilians – were wounded in the attack, which took place in Mihterlam, the provincial capital.

Tareq Arian, spokesman for the Interior Ministry, said that four civilians and four of Yarmal’s bodyguards were killed. The wounded included 28 civilians and two other guards.

No one immediately claimed responsibility for the attack but both the Islamic State group and the Taliban are active in the area. Both militant groups have carried out attacks in the past against Afghan government representatives, national security and defense personnel, and civilians.

Representatives of the Afghan government and the Taliban are holding intra-Afghan negotiations in Qatar, a Mideast country where the Taliban have had a political office for many years. The negotiations are meant to end the country´s decades-long long war, following a U.S.-Taliban peace deal signed in February in Doha, Qatar’s capital.