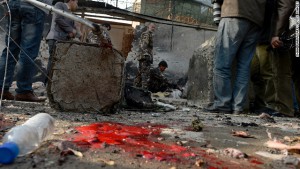 Some 14 people were killed and 11 others injured as a suicide bombing rocked Afghanistan‘s eastern province of Parwan on Monday, a provincial government spokesman said.

“The blast took place in Seyyagard District at around midday. The killed and injured were shifted to a hospital in the district, west of provincial capital Charikar city,” spokesman Wahid Seddiqi told Xinhua.

Those killed included six ALP officers and seven civilians in addition to the bomber, the official added.

“Some six police, including a local police commander, and five civilian passersby were wounded,” he said.