You are here: Home / MidEastGulf / Suicide bombers related to Islamic State suspected for the explosions in Turkey’s capital Ankara 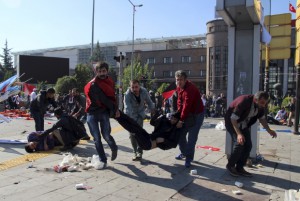 Turkey’s prime minister says “strong evidence” indicates two suicide bombers were responsible for twin explosions that killed at least 86 people and wounded 186 more during a peace rally Saturday in the capital of Ankara.

Turkish Prime Minister Ahmet Davutoglu added there would be three days of mourning for the victims. It was believed to be the deadliest attack in Turkey in years.

One of the explosions was captured on video as demonstrators gathered outside a train station in Ankara for the peace rally. Of the injured, 28 people were in critical condition, said Turkish Health Minister Mehmet Muezinoglu.

Turkey’s government said it imposed a temporary news blackout in the wake of the explosions. A government spokesman said the blackout applies to gruesome or bloody images or ones that may “create a feeling of panic.”