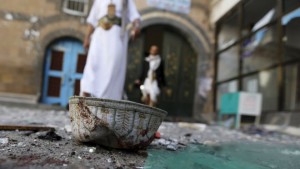 A suicide bomber blew himself up Tuesday inside a university in Yemen’s Houthi-controlled province of Ibb, according to a security source, but there were no immediate reports of casualties.

Ibb had witnessed a series of explosions that frequently targeted checkpoints of the Houthi militia.

Fractious Yemen has remained in turmoil since last year when the pro-Iranian Houthi rebels overran the capital Sanaa, from which they extended their influence to other parts of the country.