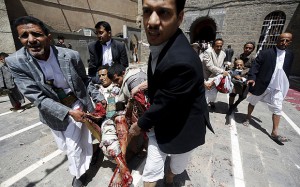 A suicide bomber dressed as a woman blew himself up Friday outside a Shiite mosque in Saudi Arabia’s eastern region of Damam, Al Arabiya reported.

There were no immediate reports of casualities from the attack, the second of its kind in a week.

According to the Saudi-owned broadcaster, the bomber blew himself up at the entrance of al-Anud Mosque after being prevented from entering the place by the guards.

A similar attack on a Shiite mosque in the eastern region of Qatif last week was blamed on the radical Sunni Islamic State militia.