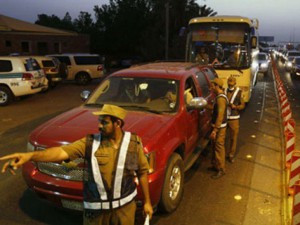 A suicide bomber in Saudi Arabia set off a blast at a Shiite mosque on Friday in the kingdom’s oil-rich eastern region, where authorities have blamed previous attacks on militants linked to groups such as the Islamic State.

There were no immediate details on casualties, but social media images showed blood-covered victims being carried away from the damaged mosque in the village of al-Qadeeh, about 240 miles northeast of the capital, Riyadh.

The Reuters news agency quoted residents saying the attack was carried out by a suicide bomber. The official Saudi News Agency reported an explosion at the mosque, but had no further details.

Saudi Arabia’s eastern region, the center for the kingdom’s Shiite minority, has been the scene of sporadic unrest and violence for years.

In November, gunmen opened fire on a Shiite religious procession, killing at least seven people. Saudi officials blamed the attack on militants linked to the Islamic State, which views Shiites as Muslim heretics and also opposes Saudi Arabia’s ties to the West.

Security has been increased in the eastern province since the beginning of Saudi-led airstrikes in Yemen against Shiite rebels in late March. Saudi Arabia accuses Shiite power Iran of aiding the rebels, known as Houthis. Tehran denies the claims.

But many Shiite leaders in Saudi Arabia have pledged support for the military campaign in Yemen, where the rebels practice Shiite traditions different from those in Saudi Arabia and elsewhere.

In past years, Shiite protesters have clashes with Saudi security forces during demonstrations for greater rights. Shiites, who account for about 12 percent of the Saudi population, claim they face widespread discrimination from the kingdoms Sunni leadership.