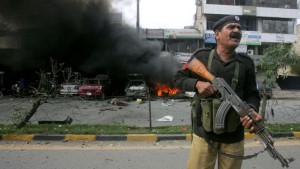 Police in Pakistan say a suicide bomber has attacked a vehicle carrying a deputy commander of police in the northwestern city of Peshawar, killing one person and wounding three others.

He says the attacker was riding on a motorcycle and blew himself up as Tariq’s vehicle passed through Peshawar, the capital of the Khyber Pakhtunkhwa province, bordering Afghanistan.

Mohammad Khurasani, a spokesman for the Pakistani Taliban, claimed responsibility and warned of more attacks. The militant group has spent more than a decade fighting to overthrow the government and replace it with a hard-line Islamic state.