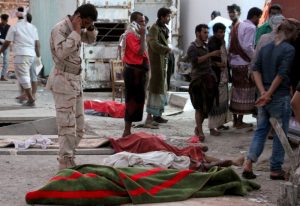 A suicide bomber killed at least eight soldiers in an attack on a military camp in Yemen’s southern city of Zinjibar at dawn on Friday, a local official and residents said to reuters.com.

The bomber, wearing a military uniform, drove a car that exploded at the entrance of the camp. Ten others were wounded.

Yemen has been embroiled in civil war since March 2015 between the internationally recognised government of President Abd-Rabbu Mansour Hadi, backed by a Saudi-led Arab coalition, and Iran-allied Houthis.

Residents said they heard a loud explosion at dawn in the city, the capital of Abyan province.

The bomber is suspected to be an al Qaeda member, the local official said.

Similar attacks have taken place in the past few months with Al Qaeda in the Arabian Peninsula (AQAP) a suspect in targeting military posts.