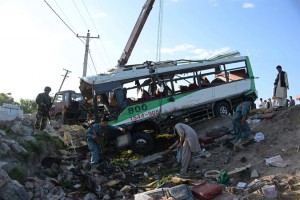 A suicide bomber struck a bus of army recruits in eastern Afghanistan, killing at least 12 people and wounding dozens, officials said on Monday.

The Afghan Defense Ministry said in a statement that all those killed in the attack, at 4 p.m. in the Surkh Rod district of Nangarhar Province, were army recruits, and that at least 26 people were wounded. Attaullah Khogyani, a spokesman for the governor of Nangarhar, put the number of injured at 38.

“The bus was coming to Kabul from Jalalabad city when a bomber riding a Zarang three-wheeler blew himself up,” the Defense Ministry statement said.

The Afghan Army, which has struggled with casualties and attrition as it has taken the combat lead after NATO’s drawdown, recruits heavily in the east and north of the country. The army and the police lost a combined total of about 6,000 men in 2015, nearly half of those casualties coming in the southern province of Helmand, which is the country’s largest province both in terms of territory and opium production.

A lack of alternative job opportunities has kept young Afghan men coming to the security forces for the entry-level salary of roughly $200 a month, despite a grim picture of what they are signing up for.

While no group has taken responsibility for Monday’s attack, the targeting of the recruitment centers has long been a Taliban strategy. A suicide attack near the police academy in Kabul, the Afghan capital, in August killed more than 20 people. And in northern Kunduz Province in 2011, a Taliban bombing outside an army center left 36 people dead and 40 others wounded.

The attack on Monday came just a few hours after yet another deadly bombing in Kabul, in which at least two people were killed and seven wounded after a magnetic bomb exploded on an Education Ministry commuter bus.

That bombing happened early in the morning, soon after staff members had left the suburb of Bagrami for the ministry’s headquarters in the city.

“In the attack on our commuter bus, two of our colleagues were martyred and seven others wounded,” said Kabir Haqmal, head of communication and information at the Education Ministry.

“The Education Ministry is neither a political nor military organization,” Mr. Haqmal said. “We educate everyone’s child, so why were we targeted?”