You are here: Home / Africa / Suicide bomber kills at least 10 in Cameroon mosque 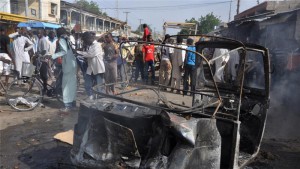 A suicide bomber killed at least 10 people and wounded at least one in an attack on a mosque in northern Cameroon on Wednesday, officials in the Far North region said, in the latest attack linked to an insurgency by militant group Boko Haram.

The Islamist group whose origins are in northeastern Nigeria has stepped up attacks in neighbouring Cameroon, Chad and Niger since last year. Many of the recent Cameroon attacks have been conducted by women.

“The suicide attack took place at 5:40 a.m. (0440 GMT) in a mosque at Kouyape. There were 13 deaths including the man who blew himself up and one wounded,” said a senior local official who declined to be identified.

Boko Haram has waged a six-year campaign for an Islamist state in northeastern Nigeria. Neighbouring countries joined an offensive against the group this year and the conflict spilled across their borders, displacing tens of thousands of people.

Cameroon is also in an 8,700-strong regional force led by Nigeria against the militants, expected to be operational by the end of the year. The United States is sending military supplies and troops to the central African country to aid the fight.