You are here: Home / MidEastGulf / Suicide bomber kills 4 Yemen troops in Aden, a day before peace talks set to begin 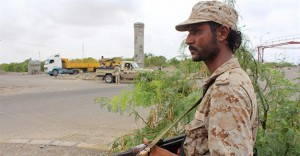 Four Yemeni soldiers were killed in an April 17 suicide attack on a checkpoint near the international airport in the country’s second city of Aden, home to a growing jihadist presence, a security official said, a day before peace talks to end a year of war were due to start.

“A suicide bomber driving a bomb-laden vehicle blew himself up on April 17 upon arrival at a checkpoint near Aden airport,” the official told AFP.

“Four soldiers were killed and two others were wounded,” he added, without blaming any group for the attack.

Yemen has been rocked by more than a year of fighting between Iran-backed rebels and pro-government forces, supported by a Saudi-led coalition.

The attack took place before U.N.-sponsored peace talks between President Abedrabbo Mansour Hadi’s government and the Houthis movement were scheduled to open in Kuwait on April 18.

Jihadists have exploited the unrest, with al-Qaeda and the Islamic State of Iraq and the Levant (ISIL) strengthening their presence in the south, including in Aden, which is serving as a temporary capital for the government.

Both groups have claimed several attacks against the army and government installations in the port city.
More than 6,200 people have been killed in the clashes lasting for longer than a year.

On April 15, a car bomb exploded in the port city near a building housing the foreign ministry, without causing casualties, security sources said.

ISIL claimed responsibility for that attack and also for a suicide bombing April 12 in Aden targeting army recruits that killed five.