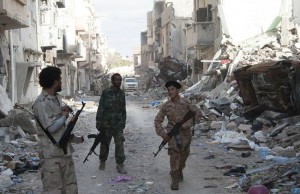 At least four people were killed and more than 20 wounded by a suicide bomb attack on a security checkpoint east of the Libyan city of Misrata, a local official news agency reported Sunday.

Libya is caught up in a conflict between two rival governments and armed forces who have attacked towns allied with opponents. But Islamist militants are also increasing their reach in the chaos since Moammar Gadhafi’s fall in 2011.

One woman and her two children were among the victims of the suicide blast at the checkpoint in Es Dada, east of Misrata, the LANA news agency associated with the Tripoli government said.

Misrata is a power base for the Libya Dawn forces who took over the capital Tripoli in the summer and set up their own self-declared government and parliament in a challenge to Prime Minister Abdullah al-Thani’s recognized administration.

Misrata forces have also been fighting on a second front with militants tied to ISIS in the city of Sirte, where extremists and local Islamist militants have been expanding.

In a separate incident, warplanes from the recognized government carried out airstrikes on Tripoli’s outskirts Sunday, targetting Libya Dawn positions, an air force spokesman said. There were no immediate reports of damage or casualties.

Libya’s rival governments are backed by two loose coalitions of former rebel brigades who once fought together against Gaddafi but fell into internecine battles soon after the NATO-backed uprising ended his one-man regime.