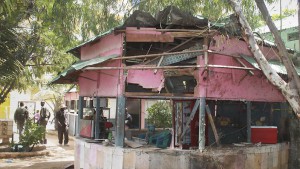 A suicide bomber has attacked a popular restaurant in the Somali capital Mogadishu, killing himself and at least three others, Somali police say.

The attacker, dressed in a business suit over a suicide vest, detonated the bomb after entering the Village Restaurant, police said.

This is the third time suicide bombers have attacked the restaurant, which is opposite Somalia’s National Theater.