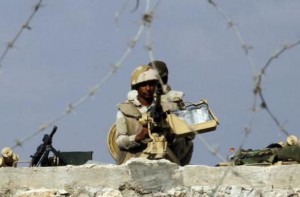 A suicide bombing attempt in North Sinai’s al-Arish city was “thwarted” on Tuesday and the assailant was killed in a gunfire exchange, the Interior Ministry said.

The attacker was driving a car loaded with explosives during curfew hours and refused to adhere to security forces’ instructions at a checkpoint, the ministry said in a statement published on Facebook.

The assailant was killed in an ensuing gunfire exchange, which left one civilian injured.

Explosives experts found “large amounts” of explosives inside the car and that the deceased attacker was wearing an explosive belt.

The residential area surrounding the checkpoint was evacuated and the roads near it were closed off, to dismantle the explosive devices, the ministry added.

Militancy inside Egypt has seen a significant rise since the military ouster of Islamist President Mohamed Mursi in July 2013, following mass protests against his rule. Most attacks target security forces in North Sinai.