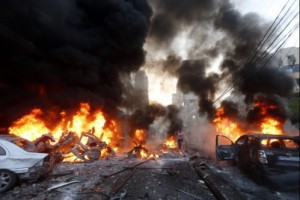 TheCable reports that the incident occurred around 4:10pm.

“The attack happened at a place called cow market and many people are expected to be involved because the market is usually busy,” a source told the news site.

The source added that the incident happened when it was raining.

Security agencies are yet to confirm the incident.

The attack is believed to be the handiwork of dreaded sect, Boko Haram.