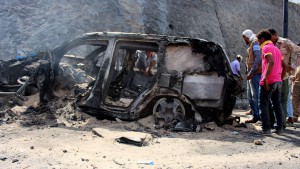 A suicide bomber blew himself up among a gathering of soldiers loyal to the government of internationally recognized President Abd Rabu Mansour Hadi near a sports stadium in the southern city, the sources said, adding that about 10 others were injured.

A ceasefire had come into effect between mainly Shiite Houthi rebels and a Saudi-led coalition backing the Hadi government at midnight on Sunday (2100 GMT).

The truce came ahead of UN-brokered peace talks due to start April 18 in Kuwait, where the Iran-backed rebels, who control the capital Sana’a, will discuss peace terms with Hadi and forces loyal to him.

Saudi Arabia and its allies, mainly Sunni Gulf countries, launched an air campaign in March 2015 in Yemen against the Iran-allied Houthi rebels in the impoverished country.

Saudi Arabia fears that the rebels will give its regional rival Iran a foothold in the Arabian Peninsula.