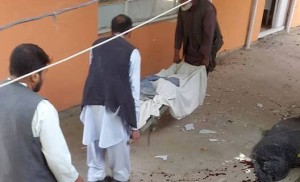 A suicide attacker has detonated a car bomb at the gate of the Paghman district office on Wednesday at around 11:00 a.m. local time, a security source said.

Kabul police spokesman, Ibadullah Razi told to Ariana News that we have been informed about an explosion in Baghman district of Kabul, but the type of the explosion is under investigation.

There are no accurate details about the number of casualties, but head of Paghman district’s criminal investigative team is in the list of killed people.

Preliminary reports also suggest that a rocket has been landed near a girls school at the side of the district office from an unknown location resulting destructions to the school and has injured schoolgirls.

Taliban spokesman Zabihullah Mujahid took the responsibility of the suicide attack claiming dozens of police members including the head of the criminal investigations were killed in the attack, but no Afghan official yet to talk about causalities.