You are here: Home / Europe / Sudanese man dies in migrant clash in Calais 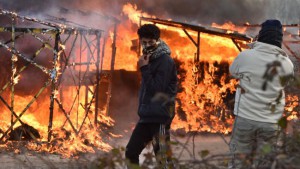 The Latest on the influx of asylum-seekers and migrants in Europe (all times local):

French authorities say a Sudanese migrant has died after a clash between groups of Sudanese and Afghans in the French port city of Calais, a flashpoint in Europe’s migrant drama.

The local administration said Wednesday that the man died Tuesday from a stab wound after a clash on a field on the edge of Calais, and four others were hospitalized with light injuries.

The slain man is the 11th migrant to die in Calais this year. Many died during dangerous bids to slip illegally across the English Channel to Britain; two have now been killed in clashes.

The number of migrants in Calais has soared this month – to nearly 7,000, according to official figures – even though a notoriously filthy camp was partially closed earlier this year.