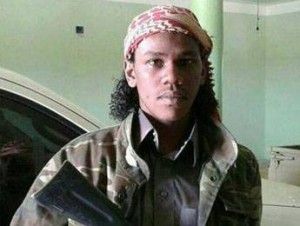 The son of a former Sudanese Islamist leader is reported to have been killed fighting for the Islamic State (IS) in Sirte.

Abdul-Ilah Abu Zaid Mohamed Hamza, is said to have been shot during last week’s fighting and died before reaching hospital. According to the Sudan Tribune, his family in Khartoum his family learned of his death and mourned him yesterday. They added that the 24-year-old had gone to Libya, via Mali, with a yunger brother, Mohamed, to fight with IS.

The family have had a history of militancy. His late father, Abu Zaid Mohamed Hamza, was leader of a hardline splinter movement from the Salafist group Jamaat Ansar al Sunnah.

Another brother, Abdul Raouf Abu Zeid Muhammad Hamza, was sentencd to death in 2010 along with three other men for the murder on 1 January 2008 of an American USAID worker John Michael Granville and his Sudanese driver, Abdel Rahman Abbas, as they were leaving a New Year’s Eve party at the British Embassy in Khartoum. All four managed to excape prison before the sentence was carried out, although Abdul Raouf was later said to have been recaptured and last reports said he as still in jail in Khartoum. He was designated a terrorist by the US.