You are here: Home / Africa / Sudan says 70 of its nationals have gone to join ISIS 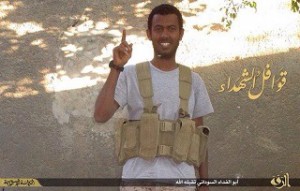 The Ministry of Interior in Khartoum announced on Monday that about 70 Sudanese both males and females have went on to join the Islamic state (ISIS) franchises both in Libya and Syria.

ISIS infiltration into Sudan among the youths has become known last March after British media outlets confirmed that nine medical students from Sudanese origins entered Syria via Turkey to work in hospitals under the control of ISIS.

Last June, 18 college students also ran off to join ISIS in Syria including the daughter of senior diplomat. In late August, at least 4 female students flew off to Turkey including twins.

Most of these recruits are believed to be flocking to ISIS-controlled territories to work in their hospitals.

The Sudanese interior minister Esmat Abdel-Rahman said that this phenomenon is a source of concern for Sudanese families though it is not as developed compared to other countries.

Abdel-Rahman pointed out that security services spotted them departing adding that the focus in the past was on those headed to Mali in western Africa.

He claimed that they have noticed an outbreak of religious extremism in Khartoum state, especially among medical college students as well as in West Darfur.

The minister confirmed that his ministry has taken measures to curb ISIS expansion in the country.

Over the past two months, Sudanese authorities detained a number clerics who are ISIS-sympathizers.

The Sudanese official also spoke of coordination with the Turkish to prevent granting visas to Sudanese except under strict rules.

Last July, Abdul-Ilah, the son of the late leader of Jamaat Ansar al Sunnah, Abu Zaid Mohamed Hamzah, was killed in armed clashes in the ISIS stronghold of Sirte in Libya.

Also, in June ISIS announced that one of its Sudanese fighters nicknamed Abu al-Fida al-Sudani was killed in their stronghold of al-Riqa.