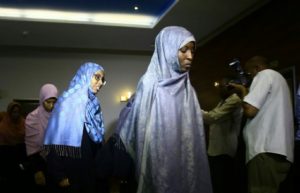 Sudanese security agents on Wednesday brought home from Libya seven Sudanese women who they said were members of the jihadist Islamic State group, like reported by news24.com.

The seven women, dressed in traditional Sudanese clothes and wearing headscarves, were shown to journalists at Khartoum airport where they were welcomed by their relatives amid chants of “Allahu Akbar”.

Three children were also brought along with the women, an AFP correspondent reported.

The group, which included twin sisters, had arrived from the Libyan city of Misrata, security officials said.

Sudanese officials say dozens of young Sudanese men and women had joined ISIS over the past few years.

Several groups of students from Sudan – some holding Western passports – had travelled to Syria, Iraq and Libya to join the group.

Sudanese media has reported the deaths of some of the students while fighting for the group in the three countries.

In 2017, Sudanese security agents brought home a four-month-old baby girl whose parents were killed in Libya while fighting for the jihadist group.

“The seven women were members of Da’esh and some had even participated in fighting on the battlefield,” Brigadier Tijani Ibrahim of Sudan’s powerful National Intelligence and Security Service (NISS) told AFP using the Arabic acronym for ISIS.

The women had gone to Libya in 2014 and 2015 to join the jihadist group, Ibrahim told reporters, as the women stood in a line against a wall with their heads bowed.