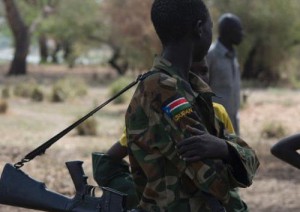 Government forces and rebels in Sudan’s war-torn border regions say they are preparing for another bout of fighting after the latest talks in Addis Ababa failed to reach a deal.

The African Union-mediated talks ended last month without a temporary ceasefire being agreed in Darfur, mired in conflict since 2003, and South Kordofan and Blue Nile states, where rebels have been battling since 2011.

Now the rainy season that leaves roads in the regions impassable has ended, both sides are braced for more fighting.

“We are preparing to defend ourselves,” said Arnu Lodi of the Sudan People’s Liberation Movement-North, which is based in South Kordofan and Blue Nile.

“Our troops are in high morale, well trained and prepared,” Lodi said.

Sudan’s military also says it is on high alert in Darfur, South Kordofan and Blue Nile.

The military had been tracking the rebels’ movements during the talks, Shami said, declining to give further details.

The latest negotiations came during a period of calm in Sudan’s conflict-hit peripheries.

President Omar al-Bashir announced a two-month ceasefire in September to persuade rebels to join a national dialogue in Khartoum.

The period coincided with the wet season, when torrential rains usually halt fighting, but the SPLM-N accused Khartoum of carrying out air raids.

“Despite the military’s commitment to the ceasefire announced by the president, it hasn’t abandoned its duty to train, mobilise and protect the country,” Shami said.

No end in sight

Bashir has been battling ethnic insurgents in Darfur for 12 years, after they rebelled against Khartoum, complaining of marginalisation.

The SPLM-N rose up in 2011 for similar reasons.

Khartoum unleashed troops, bomber jets, helicopter gunships and militia to try to crush the insurgencies, with the International Criminal Court indicting Bashir for alleged war crimes in the Darfur conflict.

The talks in Addis Ababa were the 10th round between the SPLM-N and Khartoum, and Darfuri rebels held simultaneous talks with a second government delegation.

The negotiations ended with the SPLM-N and government accusing each other of plotting to reinforce their positions in South Kordofan and Blue Nile under cover of a humanitarian ceasefire.

For the past two years, the government has mounted offensives in the dry season, which starts in November.

The talks’ failure means another is likely but a decisive victory still seems far off.

“It’s going to inflict a lot of human suffering but it will not end the insurgency,” said Magdi al-Gizouli, an independent political analyst.

In April, government-allied militia ambushed the Justice and Equality Movement’s forces in Darfur, capturing and destroying dozens of their vehicles in a major defeat.

“The Sudanese Armed Forces will try to contain the SPLM-N as far as possible just like the situation in Darfur, where you have pockets in Jebel Marra that don’t threaten anything,” Gizouli said.

In previous offensives, the military has pounded rebels in South Kordofan and Blue Nile with artillery, jet bombers as well as ground attacks with militia and troops.

But the hilly Nuba Mountains area of South Kordofan is still a major obstacle for the Khartoum regime.

“The terrain is difficult. It doesn’t lend itself to fighting, it’s very mountainous,” said a source in Khartoum familiar with the conflict.

“I think the SPLA-N has taken advantage of the rainy season to reinforce its positions,” the source said on condition of anonymity.

For civilians in rebel-controlled areas of South Kordofan and Blue Nile that the government denies aid organisations access to, renewed fighting will inflict further misery.

Nearly 150,000 children in South Kordofan and Blue Nile have not been received vaccinations because of a lack of access, with 500,000 people displaced in the two states, the United Nations says.

Fighting in Darfur has left another 2.5 million displaced in the western region, with at least 300,000 dead, according to the UN.

“The civilian population is captive to the fighting armies,” Gizouli said.