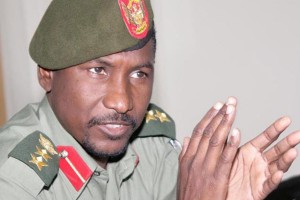 The Sudanese Armed Forces (SAF) on Tuesday summoned the Libyan military attaché in Khartoum (above in the photo) in protest against the Tobruk government’s supporting and arming of rebels from the Sudan Liberation Movement / Minni Minnawi (SLM-MM).

Sudan News Agency (SUNA) reported a spokesman for the Sudanese Armed Forces, Colonel Al-Sawarmi Khaled Sa’ad, as saying that the participation of SLM-MM fighters in the Libyan conflict alongside the forces of the retired General Khalifa Haftar poses a real threat to Sudan’s national security. particularly in Darfur.

“The participation of the SLM-MM in the Libyan conflict encourages rebel groups to destabilise security of citizens through forced recruitment and looting,” he stressed. “It is known that SLM-MM is considered an armed rebel group that carries out hostile actions inside Sudan’s territory,” the Colonel added.

On 2 August Sudan announced that Libya has withdrawn from the joint forces formed over a year ago by the two countries to monitor their common borders and curb human trafficking and terrorism.