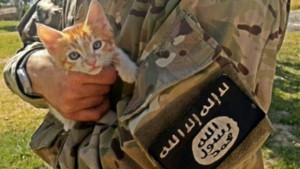 As if ISIS weren’t already bad enough, the Jihadist group has issued a decree against the internet’s mascot: Cats.

According to the Metro the Jihadist group has used Islamic law to ban the indoor breeding of cats in the Iraqi city of Mosul, which it currently controls. There have apparently already been reports of ISIS fighters going door to door in the city looking for illicit cats.

As Metro notes, it’s an unusual move by the group, given that judging by posts on social media cats are popular pets amongst fighters, with cats regularly being pictured with guns and suicide belts and the like. It just goes to show that even the world’s actual worst people can – inexplicably – have an apparently sensitive side too.