You are here: Home / MidEastGulf / Strikes on Iran-backed fighters in Syria 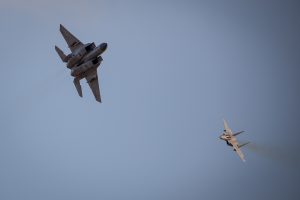 Unknown aircraft have attacked posts of Iranian-backed fighters in an eastern town near the Iraqi border, Syrian opposition activists said according to aawsat.com.

The activists said the airstrike took place in Boukamal, in the eastern province of Deir Ezzor. There was no immediate word on casualties.

A Syrian security official said Israeli jets were behind the attack but denied there were casualties.

The Britain-based Syrian Observatory for Human Rights and Deir Ezzor 24, an activist collective, said the strikes occurred near the border crossing with Iraq.

The opening of the crossing, planned by Iraq and Syria, had been postponed several times in recent weeks.