You are here: Home / Senza categoria / Strategy, not ideology, differentiates ISIS from al-Qaida 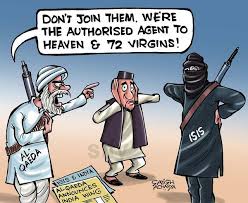 Ten years ago al-Qaida was the bogeymen of the West, a terrifying secret network that had brought down the Twin Towers on 9/11, and inspired bombs in Madrid and London. Fast forward a decade and that same spot in many people’s minds is filled by the Islamic State (ISIS), the media savvy ultra-violent organization that has carved out a small empire for itself in the Middle East.

But al-Qaida has not disappeared. Although its leader Osama Bin Laden was killed by United States Special Forces in 2011 the network still operates, nominally under the command of Bin Laden’s deputy Ayman Al-Zawahiri.

ISIS once swore allegiance to al-Qaida, but now brands itself as the dominant Sunni-Salafist Jihadi-group, outdoing its former master at its own game.

So how has the world’s former premier terrorist organization been eclipsed by an upstart and what differentiates these allies-turned-rivals?

The Islamic State was born out of the violence that gripped Iraq following the US-led invasion in 2003. Responsible for some of the worst acts of violence witnessed in the country, the group was eventually defeated and almost driven out of existence by pressure from the US military coupled with rejection by local Sunnis. The collapse of Syria into civil war served as a lifeline to ISIS, one which it exploited to the maximum to revitalize and bolster itself.

During its early years ISIS did not go by the grandiose title, Islamic State. Instead, it was known in Iraq as al-Qaida, which suggests that both groups espoused similar ideologies and objectives. Their strategies were, however, and continue to be, quite different.

From the outset al-Qaida in Iraq was noted for its brutality, a trait that ISIS continues and which marks it out from the mainstream al-Qaida branches. Although the older organization can hardly be thought of as moderate or non-violent, it consistently chastised its Iraqi affiliate for its attacks on Shi’ites and its use of gory videos showing hostage-executions during the conflict in Iraq.

These were seen as “contrary and damaging to Al-Qa’ida’s broader struggle,” Charles Lister, a resident fellow at the Middle East Institute wrote in his paper entitled Jihadi Rivalry: The Islamic State Challenges al-Qaida. But despite this, ISIS “repeatedly ignored orders to cease public displays of gruesome violence and mass casualty attacks,” Lister said.

Al-Qa’ida believed that it was necessary to win the hearts and minds of Iraqis and that acts of extreme violence would backfire. This belief appeared to be correct in view of ISIS’s initial defeat in Iraq. But the same strategy gave the organization much of its clout following its rebirth in the wake of the Syria conflict and its subsequent seizure of territory in Iraq.

Differences in their attitude to and use of violence was one way in which the two rivals diverged. The second relates to their view of the caliphate.

“Islamic State’s strategy is that first of all you declare the caliphate and then you try to hold and expand it,” Prof. Assaf Moghadam, director of academic affairs at the International Institute for Counter-Terrorism, told The Media Line. For al-Qaida, on the other hand, the caliphate was more of a “distant Utopian dream” that required preparation before it could be achieved.

These preparations – the removal of Western influence from the Middle East and the spread of Salafi ideology among Muslims – amounted to the majority of al-Qaida’s efforts. ISIS skipped the preparation and got straight into the business of creating its caliphate when it declared itself a state in the summer of 2014 following its land grab into Iraq.

One of the most significant factors surrounding the establishment of the caliphate is the prestige and credibility it gave ISIS. In many ways the announcement of the ‘State’ can be seen as the moment of ISIS’s victory over al-Qaida, the point at which the organization achieved something the previous generation of Jihadists never could.

Not only did it give the organization prestige that attracted large numbers of foreign fighters, but it allowed them to recruit directly from populations living in the territory ISIS now occupied, Moghadam said. “These are people who have the misfortune to be (living) in territories that ISIS seized… the male population, children, who are joining ISIS for reasons to do with intimidation.”
al-Qaida on the other hand never controlled a territorial body or a population from which to recruit, the counter-terrorism expert suggested.

The two rivals also differ in how they seek to spread their influence through the region. ISIS frequently makes use of fear and intimidation – the same methodology it uses to control its territory – to coerce other groups throughout the Middle East into joining its brand. Al-Qaida by contrast creates its connections through, “tight close-knit alliances based on joint fighting, common training and friends on the ground,” a model which, in the long run, is likely to be more successful, Moghadam said.
This leaves Western planners with a complex calculation: How to react to the Sunni Jihadist split.

“On the one hand the Islamic State is clearly more violent and more aggressively hard line. But until last year it was not really committed to acts of terrorism against Western countries,” Gilbert Ramsay, a lecturer in international relations at St. Andrews University, told The Media Line. On the other hand, “al-Qaida, even though it was more moderate, was primarily committed to acts of terrorism in Western countries,” he said.

It might be tempting for policy-makers to sit back and watch the two factions devour each other, as they fight it out for position of top dog. But the alternative scenario could be more dangerous, Ramsay suggested.

“The reason we ought to be more concerned about the al-Qaida/ISIS rivalry is that it places more pressure on both organizations to compete for attention,” the academic noted. Unfortunately for the West, Ramsay said, “The way to outbid the other is to conduct larger and more spectacular attacks.”