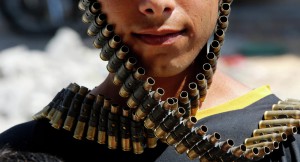 Sputnik Arabic has obtained documents, found in Iraq’s city of Mosul, revealing the full names of Daesh militants, names of the units of terrorist organizations and their heads, as well as a full list of stolen Russian weapons in their possession.

The documents were found in one of Daesh’s bunkers in the south-east of Iraq’s second-largest city of Mosul. Each of the four documents has a list of Daesh militants and the names of stolen Russian weapons they have in their possession. All the documents have the Daesh logo in the left-hand upper corner and Wilayat Ninawa (Mosul province preciously occupied by Daesh) inscription in the center.

One of the documents shows a list of Daesh militants, each of whom is in possession of a Kalashnikov assault rifle and five replaceable magazines.

Other documents specify registration numbers of Kalashnikov assault rifles, RPG-7 shoulder-launched anti-tank grenade launchers, bullpup straight-pull bolt-action rifles, VSSK Vykhlop magazine-fed sniper rifles and other weaponry. Commenting on the above documents, General Behnam Abbush told Sputnik that the terrorists have obtained the Russian-made weapons from military depots in Iraq and from terrorists in Syria after Daesh captured vast territories in these two countries.

The general said that the Iraqi army abandoned the bulk of their weapons when the terrorists overran Mosul back in 2014.

Behnam Abbush told to Sputnik that the above documents should be taken to court as they contain the full names of Daesh militants, the names of the terrorist organizations units and their leaders.