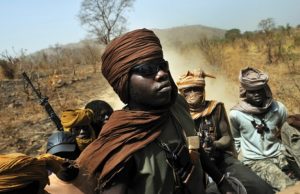 South Sudan said it deployed more troops in preparation for resumption of oil production in areas where activities stopped due to the December 2013 outbreak of conflict, which badly affected production in its Unity state and parts of the Upper Nile region.

“I would like to warn both national and international oil workers to disown calls by the government to go and work in oil fields. For your own safety, we are calling everyone not step in all areas with oil productions,” Koang said in a statement extended to Sudan Tribune on Sunday.

“Oil workers must face the risk of repercussion, should they ignor our early warning on the resumption of oil production in Unity State and other parts of the country,” he added.

Since its independence, South Sudan has relied on oil for all income—a situation that has significantly compounded ongoing political and economic instability due to fall in crude oil prices.

According to South Sudanese officials, production in the past reached as high as 350,000 bpd but fell after a dispute with Sudan over fees for pumping South Sudan’s crude through Sudan’s export pipeline, which led Juba to halt production in 2012.

South Sudan got the lion’s share of the oil when it split from Sudan in 2011, but it’s only export route is through Sudan, giving Khartoum leverage and leading to the ongoing pricing disputes.