You are here: Home / Senza categoria / ‘Stamp out ISIS NOW or face Africa terror takeover’ Theresa May warns the world

Prime Minister Theresa May is set to urge world leaders to stamp out a terrifying ISIS plot to dominate Africa, it has emerged 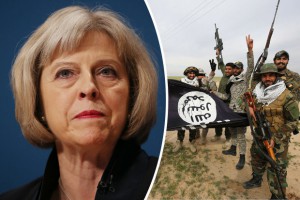 The new Iron Lady will travel to the G20 Summit in China today to issue the grim warning at her first international conference as Prime Minister.

Hordes of twisted jihadi fighters have already piled into sub-Saharan Africa from the Middle East having been pushed out by US special forces in Libya.

Niger, Chad, Mali and Sudan, and some regions of Tunisia and Algeria, are now thought to the riddled with Daesh militants looking to regroup.

If allowed to poison the minds of locals with their extremist views, it is feared they could form another so-called Caliphate in these downtrodden nations.

“We want to get one step ahead of them and prevent their next build-up somewhere else.

“These people are very committed to their cause and they are determined to destroy our way of life.”

Mrs May is due to meet with US president Barack Obama and Chinese President Xi Jinping at the two-day G20 summit.

The conference – which is made up of leaders of the world’s 20 major economies – kicks off tomorrow.

According to the official, Mrs May will call on world leaders from US, France, China and Russia  Mrso “step up their efforts” to protect vulnerable African nations.

She will also call for more decisive action in the fight against ISIS in the Middle East.

More than 6,000 jihadis had reportedly flooded Libya by April having fled coalition air strikes in Syria.

Most of Libya’s Mediterranean coastline was under ISIS control, until US and British jets bombarded them from the air, containing their influence to the town of Sirte.

And rebel force in Syria recently uncovered a prison believed to have been used by ISIS to torture and rape women.