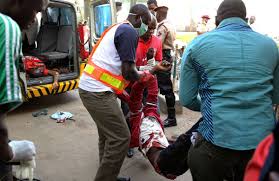 A group known as the Bomb Blast Victims Association of Nigeria has called on the Nigerian military to redouble their effort of meeting the December deadline of stamping out terrorism from the country.

A statement signed by the group’s chairman, Kayode Olatunji, on Wednesday, charged the military to increase their surveillance and information gathering on the activities of terrorists during the yuletide season.

According to the group, the fight against insurgency should be supported by all Nigerians as terrorism constitutes a major threat to the country’s existence.

The group said, “This fight is for our corporate existence and survival as a nation,”

“Putting an end to insurgency was surely one of the reasons why Nigerians massively voted for the present Muhammadu Buhari-led Administration of the All Progressive’s Congress, APC.”

Expressing optimism that the government was equal to task in ensuring that terrorism is wiped out of the country, the group said terrorists had caused untimely deaths of many people, destroyed valuable property , and has maimed many people.

“Nigerians now live in pain, fear and hopelessness due to the tragic conditions in which they have found themselves,” the group said.