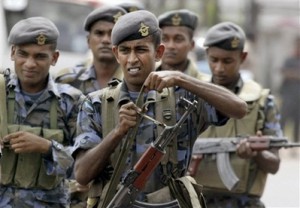 The Defense Ministry of Sri Lanka said that the military and security forces are today on alert to prevent potential terrorist attacks by the Islamic State (IS), but denied the presence of the organization in the country.

There are no need to panic to media reports on alleged IS cells in the nation, said a statement from the ministry.

Earlier this week, Defense Minister Karunasena Hettiarachchi revealed that at least 36 Sri Lankans, including women and children, traveled to Syria to join the radical group accused of many crimes.

However, police spokesman Ruwan Gunasekara said that the armed body received no information about it.

The press revealed in July last year that a national, identified as Abu Shuraih Saylani, was killed in an air strike in Iraq while fighting in the IS ranks.

Saylani was a karate teacher in the town of Galewela, in the Central Province, but he resigned for allegedly pilgrimage to Mecca, Saudi Arabia, though he actually traveled to Syria.

According to official figures, about 10 per cent of the 20 million Sri Lankans are Muslim.