You are here: Home / MidEastGulf / Spotted by ISIS, Russian special forces officer called for fire on himself 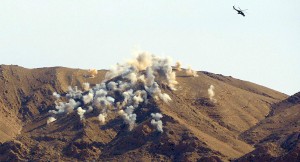 A Russian Special Operations Forces officer reportedly called a strike onto himself when he was compromised and surrounded by ISIS militants near Palmyra, where a fierce battle between the Syrian army and terrorists is in full swing.

“A Russian special operations forces [SOF] officer was killed near a town of Palmyra while guiding Russian warplanes to IS [previously ISIS/ISIL] targets,” a military source at Russia’s airbase Khmeimim told Interfax news agency on Thursday.

The source added that the special forces operator was on a mission near Palmyra for at least a week, detecting the terrorists’ most important targets and providing coordinates for Russian warplanes to strike.

“The officer died as a hero, calling a strike onto himself after he was compromised and surrounded by terrorists,” the source added.

Other details, including the officer’s identity, have not been disclosed. Previous reports from the battlefield said that the Syrian army is on the verge of retaking Palmyra – a cradle of ancient civilizations and UNESCO world heritage site – which has been held by Islamic State. The ground offensive is supported by Russia’s warplanes, while Russian-made weapons delivered to the Syrian military also help make further advances.

Russian SOF teams have been on the ground in Syria since Russian anti-IS operation started last September. Earlier on Thursday, the chief of the Russian contingent in Syria General Aleksandr Dvornikov told Rossiyskaya Gazeta in a rare interview that special forces operators conduct long-range reconnaissance and act as forward air observers.

“They conduct ground reconnaissance of pre-selected targets for Russian warplanes, assist in targeting warplanes in remote areas and perform other missions.”

Until today, four servicemen have been killed during the Syrian deployment, including Air Force pilot Oleg Peshkov, killed airborne after ejecting from a Su-24 bomber downed by Turkey as well as a Marine soldier Aleksandr Pozynich, killed during the search operation to rescue the surviving Su-24 pilot.

Names of the two other deceased Russian servicemen – Ivan Cheremisin and Fedor Zhuravlev – only became known to the public at the March ceremony in the Kremlin when President Vladimir Putin presented military awards and decorations to those involved in the Syrian operation. He stressed that the servicemen who sacrificed their lives in fight against terror “remained committed to their duty until the end.”