You are here: Home / Africa / Split between ISIS and Al-Qaida in Somali Shabaab raises fears of terrorism in Kenya

ISIS group of some 100 fighters in north Kenya grows with addition of break-away faction of Somali militants, including mastermind of university attack that left 148 people dead. 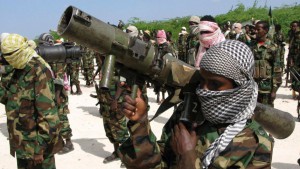 A breakaway faction of Somali Islamic insurgent group al-Shabaab has joined Islamic State in northern Kenya, raising fears of a surge in attacks as the groups compete for attention, Kenyan police said Friday.

Security forces believe the split could cause a surge in attacks at shopping malls, ferry-crossing points, churches, airports and railway stations as the two factions try to outdo each other in terror attacks, Inspector General Joseph Boinnett said.

“They are competing to spread an international jihadist agenda, which could be deadly if and when it happens,” Boinnett said.

The Islamic State faction has shifted its operating base to Lafey, near Mandera, where the group attacked a bus on Monday, police said.

At least two people were killed and several others injured in the attack.

The bus was carrying more than 50 passengers when it was ambushed along the road between Kutulo and Daba villages in Mandera.

The group operating in Lafey comprises about 100 fighters. Mohamed Kuno, also known as Amadheere, the mastermind of the Garissa University attack where 148 people were killed in April this year, is said to have joined the Islamic State faction.

The group is believed to be taking advantage of an unmanned stretch of the Kenya-Somalia border to plan attacks in Kenya.

“Terrorism is still a threat to us,” Boinnett said. “We have improved our response and the various security units are cooperating. This way, we have been able to foil dozens of attacks this year.”

The remaining al-Shabaab faction is believed to be comprised of fighters who are mostly from Kenya, who are operating from the Boni Forest in Lamu. The group is loyal to the Al-Qaida terrorist network.

The militant group al-Shabaab has staged attacks in Kenya since 2011, when the country sent troops to Somalia to help the government battle the insurgents.

The militants targeted Nairobi’s Westgate shopping mall in September 2013, killing 67 people, and a university campus in the eastern town of Garissa in April, killing at least 148.