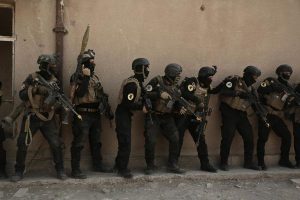 Special Iraqi forces have been formed to search for Islamic State members hiding among civilians in eastern Mosul, a report has said as fears grow of the group forming dormant cells in the recaptured region, like reported by iraqinews.com.

According to al-Arabiya website, the special forces began their operations two months earlier, when Iraqi government forces took over eastern Mosul from IS.

The report quoted members of the forces saying they rely on intelligence information, experts, suspects confessions and documents left behind by the extremist group as means to screen the suspects and verify their affiliation with the group.

Security commentators had voiced concerns that IS might have left dormant cells inside the recaptured areas in eastern Mosul. The area has already witnessed attacks by IS suicide bombers, drones and gunmen in the weeks that followed the security takeover, leaving casualties among civilians and security members.

Iraqi commanders have said recently they became in control over 50 percent of western Mosul. Operations to retake the city launched in October 2016.

The recapture of Mosul could deal the deadliest blow to IS’s influence in Iraq, but observers fear the group could shift to lone wolf attacks and guerilla fights if lost the city.