You are here: Home / MidEastGulf / Special Forces in ‘limited’ ground operation in Yemen 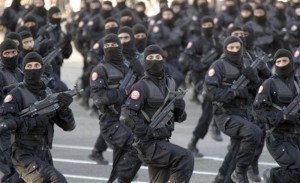 Special Forces from the Gulf States have carried out a limited ground operation in Yemen to help to fight Houthi militias, informed sources told Al-Araby Al-Jadeed on Sunday. According to the sources, the troops entered Yemen from the sea. They stressed that Egyptians were not involved and the operation was not part of a wider ground invasion.

The 700 Egyptian troops sent to Saudi Arabia are still there, it is claimed. Other “rapid response” troops are still in their bases in Egypt. Although the Egyptian leadership was not informed about the operation officially, it was made aware of it by its intelligence sources.

According to local residents speaking to Anadolu news agency, around 30 troops from the Saudi-led coalition entered Yemen and have been taking part in fighting around Aden Airport.

Although Saudi military spokesman Ahmed Al-Asiri denied that any foreign troops had gone into Yemen, he reiterated the claim that the coalition is still fighting against the Houthis. Al-Jazeera correspondent Hamdi Al-Boukari, however, claimed that he saw foreign fighters in Aden with his own eyes.