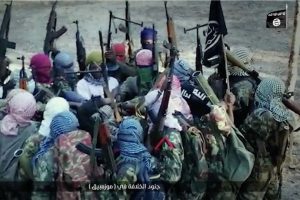 Special forces were on standby last night as fears grew for missing Brits caught up in the Mozambique massacre.

Special Boat Service commandos were preparing to move to Cyprus and from there stage a rescue operation as the search continued.

Dozens of local civilians and soldiers have been killed, many beheaded, and thousands displaced by Islamic State terrorists storming the city of Palma.

A small number of people fleeing the massacre were taken by helicopter out of the battle.

US State Department acting special envoy for the anti-ISIS coalition John Godfrey said: “The attacks there are horrific, frankly, and show a complete disregard for the life, welfare and security of the local population.

“Attacks such as these are clear indicators that ISIS continues to actively seek to spread its malign activity to new fronts.”

Islamists hit the town, adjacent to gas projects worth £44 billion, with a three-pronged attack on Wednesday.

Fighting was still raging yesterday and Islamic State claimed the attack via its Amaq news agency.

They had killed at least 55 people, destroyed and taken control of buildings including factories and banks, and seized vehicles.

The British High Commission in Maputo was unable to confirm that all UK nationals have escaped the massacre, with at least one Brit, Phillip Mawer, 44, from Somerset, missing, feared dead.

A large number of a number of Europeans were trapped in a hotel as the insurgency swept through the city.

Private security company the Dyck Advisory Group has rescued over 120 people – but there is confusion about the number of UK workers missing.

One escape boat offloaded more than a thousand refugees in the town of Pemba, nearby.

A 20 strong SBS unit was last night preparing to fly to the military base at RAF Akrotiri in Cyprus – pending a foreign office decision.

A handful of SAS personnel in Kenya helping to train government soldiers against terrorism may join the special forces “task group.”

One option may be for the additional force to fly into Kenya to bolster SAS troops already based there and then travel to the Mozambique coast.

One source told the Daily Mirror: “At present we are only looking at contingency, being ready to go if the Foreign, Commonwealth and Development Office officials give the go-ahead.

“Getting information about the situation on the ground is hard.

“They can only move if there is some sort of hard evidence of Brits bring trapped or in need of support.

“At this stage it is up to the Foreign Office to establish who is missing and roughly what area they are in, then if the FCO says rescue them the Director of Special Forces will give the word and the team will go.”