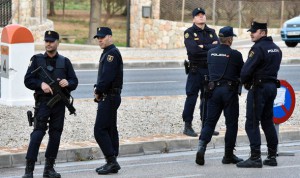 The ministry said one of the accused had planned on joining the Islamic State group in Syria and had travelled to the country’s border with Turkey to meet a member of the organisation to be trained before returning to Europe to take part in an attack.

The man was arrested by Turkish police before crossing the border and was returned to Spain once released where he continued efforts to join the militant group, the ministry said.

The other man is accused of helping the first in his attempts to travel to the war zone in Syria and of training him after he returned to Spain.

The accused are residents in the southern Spanish city of Murcia and the northern city of Valladolid.

It comes as French police arrested two young women from the city of Nice for suspected ties to the ISIS militant Rachid Kassim, the Paris prosecutors’ office said yestrday.

The teenagers, aged 17 and 19, were being groomed to carry out an attack on “specific targets” in France in retaliation for the recent death of the Islamic State’s spokesman Abu Muhammad al-Adnani, a source close to the investigation said.

The pair used the Telegram encrypted messaging system to communicate with Kassim, who is suspected of having participated in several attacks or attempted attacks in France.

Security experts have warned that authorities often turn a blind eye to women jihadis because they are not deemed to be a high risk.