The shipping containers were marked as humanitarian aid for the Middle East. 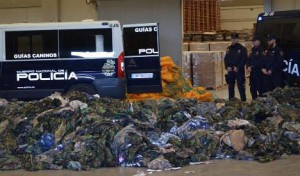 Police in the Spanish port cities of Valencia and Algeciras found more than 11,000 pounds of material in three large shipping containers marked as “secondhand clothing” for humanitarian aid. The items were allegedly destined for the Islamic State and the al-Nusra Front, al-Qaida’s Syrian branch.

“With nearly 20,000 uniforms and military accessories seized, they would have been able to equip an entire army, which would be perfectly prepared to enter combat in any of the centers of conflict where terrorist jihadist organizations operate in the world,” an Interior Ministry official said Thursday.

The ministry said the uniforms, which were not manufactured in Spain, came through a well-established network of suppliers that also provide technology, weapons and other material at “the best prices and quality of goods.”

The seizure of the material is linked to the separate arrests last month of seven people, five of whom are Spanish citizens, suspected of sending military supplies to terror groups in packages deliberately misidentified as humanitarian aid.