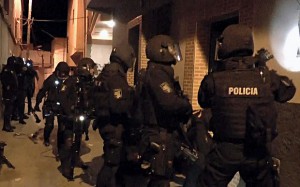 Spanish police say they are investigating an arms cache found in the country’s North African enclave of Ceuta that might have links with the Islamic State group.

Police said among the items discovered in perfect condition were two submachine guns, three pistols, an air gun that had been “modified for use with live ammunition,” assorted ammunition, knives and an IS flag.

The statement on Saturday said the weapons were found Thursday in a field near Mirador de Benzu at the eastern tip of Ceuta. Investigators were examining the items for evidence that might point to the identity of those who hid them.

Spanish police have in recent months arrested several suspected members of jihadi cells who sought to recruit IS fighters from Spain’s enclaves of Ceuta and Melilla.