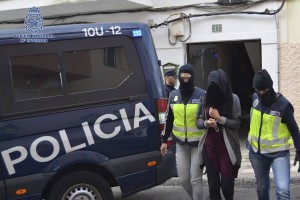 Spanish police say they have arrested two people suspected of being key figures in spreading propaganda and recruiting followers in Spain for the Islamic State group.

A National Police statement said the two suspects, both of Moroccan origin, were arrested Tuesday in northern Spain, one in Gijon and the other in San Sebastian.

The statement said they were fully integrated in the Islamic State armed group’s structure and were intensively active on the internet, praising the group’s activities and posting videos of its attacks. It said they worked to recruit militants and encouraged attacks to be carried out.

Police said 120 suspected pro-jihad activists have been arrested in Spain since 2015 while Spanish agents had helped arrest 30 more in other countries.