You are here: Home / Europe / Spain: new gateway to Europe for illegal mass-migration 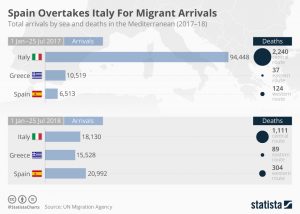 On July 26, some 800 migrants from sub-Saharan Africa violently stormed the border fence between Morocco, where they were living illegally, and the Spanish enclave of Ceuta, like reported by zerohedge.com.

According to Spanish authorities:

“In an attempt to stop the Guardia Civil getting close to the break-in area, the migrants … [pelted] officers with plastic containers of excrement and quicklime, sticks and stones, as well as using aerosols as flame-throwers.”

Many people were wounded in the clash, and 602 migrants succeeded in entering Spanish territory.

Two weeks earlier, the rescue ship Aquarius, operated by the French NGO Sos Méditerranée, picked up 629 Sub-Saharan migrants off the coast of Libya. After both Italy and Malta refused to take in the migrants, with Italian Interior Minister Matteo Salvini declaring, “No to human trafficking, no to the business of illegal immigration,” Spain welcomed the ship, and two other vessels carrying illegal migrants, at the port of Valencia.

Prime Minister Pedro Sánchez, the head of Spain’s newly-formed socialist government — which has promised free healthcare to the migrants and says it will investigate every asylum claim individually — said in mid-June: “It is our duty to help avoid a humanitarian catastrophe and offer a safe port to these people, to comply with our human rights obligations.”

According to a July 27 report about Spain in The Telegraph:

“The country is now the largest gateway for migrants crossing the Mediterranean to Europe, with 20,992 people landing on its shores so far this year… Arrivals to Italy now trail Spain by almost 3000 – a gap that just a week ago was 200.”

This, the report says, has completely “overwhelmed” the Spanish coastguard, which is issuing an urgent call for additional resources to help deal with the massive influx.

According to a 2017 report by the European Commission:

“The geographic distribution clearly reveals that a majority of irregular migrants rescued in the Central Mediterranean are most likely not refugees in the sense of the Geneva Convention, given that some 70 % come from countries or regions not suffering from violent conflicts or oppressive regimes.”

Absorbing the large numbers of migrants is not the only problem that Spain has to contend with, however. According to a December 2016 report in the Financial Times, based on confidential reports it obtained, the European Border and Coast Guard Agency (Frontex) accused some charitable organizations that support rescues in the Mediterranean of collaborating with human traffickers. This claim was also made by the pan-European think tank, Gefira, which posted a YouTube video listing the NGOs that have been abetting – regardless of their “high-minded intentions” – the criminal practice of smuggling people into Europe for financial gain.

According to The Independent:

“At the last European Council summit in Brussels at the end of June, EU national leaders agreed on the need to set up secure centres to process asylum claims, as well as agreeing a raft of hardline stances on migrants – such as condemning NGO-operated rescue boats operating off the Libyan coast.”

However, despite the agreement between EU members, “no north African country has yet agreed to host migrant screening centres to process refugee claims,” according to Dimitris Avramopoulos, the European commissioner for migration.

The Speaker of Egypt’s House of Representatives, Ali Abdel Aal, told the German newspaper Welt am Sonntag on July 1, “EU reception facilities for migrants in Egypt would violate the laws and constitution of our country.”

Abd al-Aal recalled that a high number of migrants are already living in his country. “We already have about ten million refugees from Syria, Iraq, Yemen, Palestine, Sudan, Somalia and other countries,” said Ab al-Aal. In Egypt, all refugees have a right to health care and education. “This means that our capacities are already exhausted today. It is therefore important that Egypt receives support from Germany and the EU.”

“We have created refugee shelters for tens of thousands of people, but there are hundreds of thousands of illegal migrants in our country. This has heavily impaired the security situation. They include terrorists, criminals, and human traffickers who do not care about human rights. It’s horrible. In order to improve the situation, we must fight these structures. But we also need more international help for this. It begins with our country’s borders. It is imperative that they be better controlled.”

“I am very surprised that while nobody in Europe wants to take in migrants anymore they are asking us to take in further hundreds of thousands.”

In an article for Gatestone in March 2018, Uzay Bulut sheds light on why the migrant crisis has become a problem that many European governments are beginning to recognize: “demographic jihad.”

“… Europe is going through a time that is out of the ordinary. Its population is declining and aging… So, people coming from outside get the jobs there. But Europe has this problem. All of the newcomers are Muslim. From Morocco, Tunisia, Algeria, Afghanistan, Pakistan, Iraq, Iran, Syria, and Turkey. Those who come from these places are Muslim. It is now at such a level that the most popular name in Brussels, Belgium is Mohammed… [If this trend continues], the Muslim population will outnumber the Christian population in Europe… Europe will be Muslim. We will be effective there, Allah willing. I am sure of that.”

The Turkish leadership’s assessment echoes a sermon delivered at the Al-Aqsa Mosque in Jerusalem on September 11, 2015 (the 14th anniversary of the 9/11 attacks) by Imam Sheikh Muhammad Ayed, who stated, in part:

“They [Westerners] have lost their fertility… We will give them fertility! We will breed children with them, because we shall conquer their countries. Whether you like it or not, oh Germans, oh Americans, oh French, Oh Italians, and all those like you. Take the refugees! We shall soon collect them in the name of the coming Caliphate… We will say to you: These are our sons. Send them or we will send our armies to you.”

The act of migration has a strong basis in the Qu’ran. For example, Verse 9:20states:

“The ones who have believed, emigrated and striven in the cause of Allah with their wealth and their lives are greater in rank in the sight of Allah. And it is those who are the attainers [of success].”

“And those who emigrated for the cause of Allah and then were killed or died – Allah will surely provide for them a good provision. And indeed, it is Allah who is the best of providers.”

None of the above, however, appears to have put a dent in the policies or ideology of the left-wing parties supporting the new Spanish government. On June 29, following the European summit, Sanchez tweeted:

“…The EU is beginning to move in the right direction: to give a European perspective to a European challenge such as migration.”

Sanchez was correct, but for all the wrong reasons. The “European perspective” that he and fellow EU members should be embracing is that of democracy and freedom, not one that allows the unfettered entry of millions of penniless and unskilled illegal migrants, among whom are radical Islamists whose beliefs are antithetical to European values.

In case Sanchez has not been paying attention, the influx of illegal immigrants from the Middle East and Africa has been taking a serious toll on Europe. According to a recent Heritage Foundation report:

“Over the past four years, 16 percent of Islamist plots in Europe featured asylum seekers or refugees… Radicalization of plotters generally occurred abroad although in the most recent plots, more commonly within Europe itself. Europe’s response to migration flows has been inadequate and inadvertently increased the terrorist threat dramatically…”

In the book Europe All Inclusive by former Czech President Václav Klaus, co-authored by the Arabic-speaking economist Jiří Weigl, the authors sum up the role that the Left plays in the migrant crisis:

“Europe, and especially its ‘integrated’ part, is riddled with hypocrisy, pseudo-humanism and other dubious concepts. The most dangerous of them are the currently fashionable, and ultimately suicidal, ideologies of multiculturalism and humanrightism. Such ideologies push millions of people towards resignation when it comes to concepts like home, motherland, nation and state. These ideologies promote the notion that migration is a human right, and that the right to migrate leads to further rights and entitlements including social welfare hand-outs for migrants… Europe is weakened by the leftist utopia of trying to transform a continent that was once proud of its past into an inefficient solidaristic state, turning its inhabitants from citizens into dependent clients.”

As the “largest gateway” for migrants now entering Europe, Spain has a particularly great responsibility to wake up to and deal with reality.