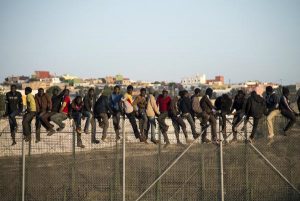 A new report from Spanish police sources indicate that at least 50,000 sub-Saharan Africans are in Morocco waiting to head to Spain as Spanish Foreign Minister Josep Borrell has claimed Europe needs “new blood”, like reported by breitbart.com.

The sources say that the migrants, helped by mafia-linked people traffickers who promise them that Spain is a “paradise”, have come through the southern border of Morocco and an increasing number are gathering in the north of the country, Spanish newspaper El Mundo reports.

The European Union has also described the state of the southern border of Morocco in a risk analysis claiming that “Internal issues in Morocco, the main transit country to Spain, have caused a gap which allows more exits, particularly from the west coast of Morocco.”

Police also note that the migrants are becoming increasingly more violent, citing the recent storming of the Spanish North African enclave of Ceuta last week in which some 800 migrants attacked police with makeshift flamethrowers and other weapons.

Spanish Foreign Minister Josep Borrell has denied that mass migration is taking place in Spain despite the country seeing 18,016 migrants arrive from the start of the year until mid-July, a figure higher than both Italy and Greece. The figure topped 20,000 before the end of the month.

Borrell, a member of the Socialist Party said: “We’re talking about 20,000 (migrants) so far this year for a country of more than 40 million inhabitants. That’s not mass migration.”

“Europe’s demographic evolution shows that unless we want to gradually turn into an ageing continent, we need new blood, and it doesn’t look like this new blood is coming from our capacity to procreate,” he added.

While the Spanish police believe that at least 50,000 migrants are currently waiting to cross into the country, others have warned that the number could reach millions if the government does not change course.

The leader of the Popular Party Pablo Casado warned: “It isn’t possible to give legal papers to everyone, nor is it for Spain to absorb the millions of Africans who come looking for a better future in Europe.”

“And because it’s not possible, we have to say so, even if it is politically incorrect,” he added.